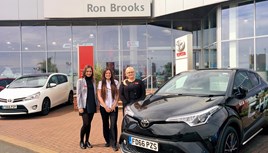 India McFadyen from Mansfield, Alex Pearson from Clipstone and Nikita Lane from Forest Town (pictured) have been accepted onto the programme which will see recruits trained at Toyota’s new Burnaston-based facility.

The two-year scheme, which includes nine modules, will train the apprentices in customer service and communication skills alongside the sales process.

Trainees will initially work towards their bronze accreditation, before moving through silver and eventually graduate to gold by the end of their second year.

Ron Brooks Mansfield dealer principal, Mike Lane, said: “For many years we have successfully ran apprenticeship schemes for vehicle technicians and parts advisors, so it is with great pleasure we launch the trainee customer consultant programme with three young and passionate recruits.

“There’s a shortage of females in the motor retail industry and it’s refreshing to have such genuine enthusiasm shown by all three of them. In truth, we weren’t looking for three recruits but such was the impression they made on us we made the decision to take them all on.

“With the introduction of fantastic products such as the new C-HR and Yaris it’s an exciting time to join the Toyota brand.”

Will car dealers get a fair piece of the apprenticeship pie?

Will car dealers get a fair piece of the apprenticeship pie?