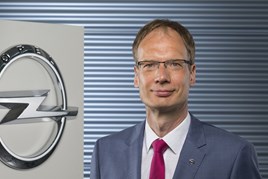 New Opel/Vauxhall chief executive Michael Lohscheller has been charged with bringing the brands back into profit following the departure of Karl-Thomas Neumann.

Neumann, who had held the post since 2013, said that his decision to leave the brands had been a “difficult personal decision”.

He is expected to remain on Opel’s board until the £1.9 billion deal between PSA and GM is completed, however.

Lohscheller takes up the post of Opel/Vauxhall chief executive from his previous role as chief financial officer and will be charged with overseeing the brands’ return to profit.

PSA wants the brands to meet an operating margin goal of 2% in 2020, growing to 6% by 2026, after a run of financial results which have seen them fail to generate a profit since 1999.

The chairman of the managing board of Groupe PSA, Carlos Tavares, said: “We fully support the decision to appoint Mr Lohscheller who will be surrounded by Opel's best talents to bring Opel/Vauxhall to new horizons for the benefit of its employees, customers and partners.

"My personal interactions with Michael have been extremely positive, where he has shown a great deal of insight of Opel and Vauxhall, as well as a solid understanding of the international marketplace."

He added: "I am enthusiastic about the idea of contributing to the rebirth of Opel as a sustainable German-based company within Groupe PSA."

Before joining Opel, Lohscheller was Executive Vice President and chief financial officer at Volkswagen Group of America, where he led a successful turnaround driving significant growth and profit increase.

During more than 20 years working for companies such as Daimler, Mitsubishi Motors Europe and Volkswagen, Lohscheller’s responsibilities spanned finance, IT, purchasing and logistics.