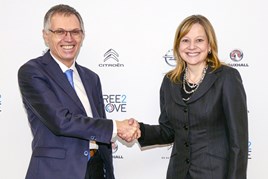 As talks are ongoing about the future of Vauxhall manufacturing facilities in the UK – Carlos Tavares,  the chairman of PSA Group’s  managing board, has said he wants to realise £1.47bn of “synergies” by 2022 – it seems unlikely that the dealer networks will escape change.

“There are bound to be economies of scale across the business,” said Graham Jacobs, chief executive of Picador and an active member of the Vauxhall dealer council.

“If you have a national dealer development director who says ‘why haven’t we got a Peugeot dealer in Southampton’, and there are four Vauxhall sites down there it would be daft not to put the two together. I’m sure that is something we will see.”

Mark Frostick, associate at property and planning consultancy Rapleys, agreed. He told AM that, while “wholesale closures” within the Vauxhall dealer network were unlikely, there could be scope for dealerships to incorporate other brands into their sites.

“This could work, for instance, where Vauxhall previously cohabited with other GM brands, such as Saab or Chevrolet.”

However, he added: “It is unlikely that this deal will have a major impact on the dealership market in the short to medium term.

“Indeed, there could even be renewed growth. The expanded size of the overall company could lead to renewed investment, possibly the redevelopment of old sites for new, state-of-the-art facilities or even a relocation of all brands in a town to a single, larger bespoke site.

“If the new owners can return Vauxhall/Opel to profit, then their existing properties may become a more attractive investment and we could see a significant hardening of yields.”

The impact on volume targets

Jay Nagley, managing director of automotive consultancy Redspy, believes Vauxhall’s acquisition could usher in a new approach to targets and incentives within its network.

He said Peugeot has worked hard to reduce production in order to limit pre-registrations and maintain pricing in recent years, an approach that is “overdue” at Vauxhall.

“For too long, Vauxhall has offered incentives to dealers to drive volumes and the result has been considerable pre-registrations.

“Some dealers have done extremely well out of the existing Vauxhall system, but they will need to reassess that approach under PSA.”

Some Vauxhall dealers may also be affected by the differing nature of GM and PSA’s approach to sponsoring dealers. Under its previous owner, Vauxhall Motor Holdings chose to enter into joint ventures with certain franchisees to buy or start their own businesses, whereas PSA owns some sites outright through Peugeot Citroën Retail Group.

Will it affect model line-ups?

By comparison with Volkswagen Group, which can pitch products at all levels of the market, from ‘youthful’ Seat and Skoda’s budget offerings, to Volkswagen’s upper- middle market and premium Audis, the new PSA Group has added a mainstream brand to a line-up already battling to achieve differentiation.

As part of Tavares’ ‘Back in the race’ plan, which was announced in early 2014 and established DS as a separate brand, PSA said it would cull its models from 45 to 26 by 2020.

It remains to be seen whether the addition of Vauxhall will affect those numbers, but Maxime Picat, PSA’s executive vice-president for Europe, described the addition of Opel/Vauxhall as creating “a portfolio of brands that are very well positioned, with very limited cross-shopping”.

Picat claimed that “cross-shopping” between the brands would be as low as 3%, depending on the country.

However, there are areas in which the brands may complement each other. Vauxhall has a strong representation in the fleet market, while Citroën and DS are more retail-oriented brands, with Peugeot coming somewhere in the middle.

How the figures stack up

PSA Group now sees itself as a “European champion”, according to Picat, with Vauxhall taking its total market share in Europe to more than 17%.

However, Vauxhall’s contribution to 17 years of losses in Europe for GM cannot be overlooked and its UK market share fell from more than 14% in 2008 to below 10% for the first time in 2016.

The new PSA Group has seen registrations, number of retail locations and market share all fall as key rivals have grown in the past decade.

Jointly, their UK market share fell 1.66% to 15.91% in 2016, the largest fall by any of the European manufacturer alliances and some 1.19% greater than the decline in the scandal-blighted Volkswagen Group (down less than half a percentage point to 19.01%).

As detailed on Page 16, Peugeot is the only one of the PSA brands to achieve a rating (7.7) higher than the average (6.1) in the latest NFDA Dealer Attitude Survey. Vauxhall came in just below the average, at 6.0 and Citroën was again the lowest-rated manufacturer, at 3.8.

Getting back in the black

Despite the challenges, Christian Stadler, a professor of strategic management at Warwick Business School, believes PSA is up to the task of turning the group around: “Scale matters, particularly for mass-market producers. It means PSA can spread its R&D costs over a larger group and this should be helpful considering the substantial shifts the industry is experiencing in such areas as e-vehicles and self-driving cars.

“PSA has a track record of turning around loss-making mass-market producers and its margins above 6% are impressive.”

In Europe, R&D is “capitalised” as an asset whereas under GM’s American-style accounting principles it was treated as a sunk cost.

Evercore said this simple change in accounting practice could see the business swing back into the black.

Picat seems sure PSA can work magic under any circumstances, even claiming a “hard Brexit” could provide a positive outcome.

He said the prospect of a soft Brexit would be “nice”, but suggested the hard option may present opportunities for Vauxhall’s UK plants at Ellesmere Port and Luton, suggesting: “Maybe we can introduce a Peugeot or Citroën if it makes sense”.

What does it mean for Vauxhall’s UK plants?

Nagley acknowledged that if Vauxhall were to move to limiting pre-registrations, it may affect Vauxhall’s UK factories, with lower production adding to the case for closures.

PSA has pledged to honour agreements stating that Ellesmere Port will produce the Astra until 2021 and Luton will make the Vivaro until 2025. In a meeting last month, Tavares assured Greg Clark, the business minister, and Len McCluskey, the leader of the Unite union that he was “not here to close factories”.

However, Jacobs feels closures are inevitable. He said: “I think, short-term, there has to be some pain. They have to close some factories.

“Look at the way GM turned things around in America. They made $12bn in the US last year, simply because they are the right size for the market now. You simply cannot have factories continue operating on two shifts. It’s not sweating the asset.”

Stadler shares this opinion: “I would expect job cuts. PSA has done it before and there is no other way to realistically achieve the cost savings they have in mind, which might possibly mean plant closures as well.

“The UK is definitely in a bad position as Brexit makes it less competitive than Germany and the unions are stronger in Germany.

“GM has been losing money in Europe since 2000. Last year, they would have made a profit, but the devaluation of the pound caused another loss.”