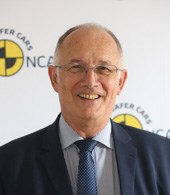 Euro NCAP members have elected Pierre Castaing (pictured) as its new president and chairman, having served as a member on the board of directors since 2000, representing French MoT.

Originally an aeronautical engineer, Castaing has worked in the field of personal protection and vehicle safety for over three decades.

He is presently head of regulatory affairs for the UTAC CERAM Group, having held that position since July 2012.

“I am looking forward to working with the Board members to implement the organisation’s ambitious plans,” said Castaing.

“Euro NCAP has an important role in the promotion of innovative safety systems in new vehicles sold in Europe, thanks to its ability to continually adapt its requirements, encouraging industry to reach the best achievable level of safety in an affordable way.”

Euro NCAP’s secretary general Michiel van Ratingen said: “I have worked for many years with Pierre as a Euro NCAP Board member and congratulate him for having been appointed to take over this important role.

“I am confident that Pierre’s longstanding experience in vehicle safety will be a great benefit to the organization and help us deliver the next roadmap.”