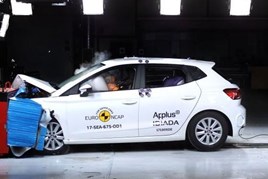 Seat’s new Ibiza hatchback became a benchmark for its sector as the Ford Mustang improved its safety rating to three stars in the latest round of Euro NCAP tests.

The Spanish hatchback raised the bar during the most recent testing – carried out by Thatcham Research – which also yielded impressive five-star ratings for the Alfa Romeo Stelvio, Volkswagen Arteon and Hyundai i30, while the Honda Civic emerged with four stars.

Meanwhile, Ford resubmitted its flagship Mustang sports car for testing, following criticism over its two-star result earlier this year, and emerged one star better off.

“In just a few months, Ford has responded to improve on the initial low safety rating given to the Mustang,” said Matthew Avery, director of research at Thatcham Research.

“Our advice to buyers is to always opt for a Euro NCAP five star car, so a three star Euro NCAP rating is never a cause for celebration.

“However, Ford’s rapid addition of a suite of standard-fit safety tech and its prompt updates to improve the performance of the airbags and restraints is to be applauded and underlines the power of the Euro NCAP consumer testing programme as a force for positive action.

“We will continue to apply pressure on carmakers to ensure UK drivers have the safest possible cars.”

July’s standout vehicle was the Seat Ibiza. Avery said that the £13,000 supermini had “set a new benchmark in safety for the Supermini price point category”, adding: “The Ibiza not only comes with standard-fit AEB but also Pedestrian AEB – which is proven to reduce vulnerable road user deaths.”

Avery added: “The new VW Polo will be built on the same platform as the Ibiza which bodes well and with major new Supermini launches expected later in 2017, the safety game is now on for carmakers in this category.”