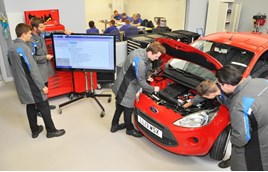 Ford has begun a bid to recruit 1,000 technicians for it UK dealerships with the lure of potential salaries of up to £45,000-per-year.

The blue oval credits the ongoing Transit sales success, the launch of the new Fiesta and planned introduction of new electric and hybrid powertrains for stimulating a surge in demand for technicians.

But it will be going into competition with Volvo - currently looking to add 300 technicians - and franchised dealer groups Pendragon and Arnold Clark in its bid to attract new experts to man its busy workshops following the launch of a string of nationwide recruitment campaigns.

Andy Barratt, chairman and managing director of Ford of Britain, said: “This is a fantastic opportunity to join the UK’s biggest network, representing the country’s favourite car and van brand.

“Ford’s product range is growing almost as fast as its technology, and although we value traditional technical skills, we’re looking for ambitious and flexible technicians who can join us on our journey to hybrids, battery electric vehicles, autonomous technology – and beyond.”

Training, up to master technician level will be provided free of charge to Ford’s new technicians at the state-of-the-art Henry Ford Academy in Daventry, which is partnered with The Motor Ombudsman, the organisation responsible for raising industry standards and improving best practice in aftermarket servicing across the industry.

Responsible for complex diagnostics and repairs, master technicians, the highest ranking of technicians, can earn up to £45,000-a-year, according to Ford.

UK’s automotive trade body, Society of Motor Manufacturers and Traders, recorded 2016 as the busiest year on record for automotive workshops and garages in the UK.

Ford invests over £500m annually on research and development in the UK and more than £1 billion UK-built engines are exported annually. Ford has been the UK market leader for commercial vehicles since 1965, with over 30 per cent of market share, and has topped UK car sales since 1976.

Potential technician candidates should contact Ford at recrui20@ford.com to be put in touch with their local dealer, whilst those interested in apprenticeships at Ford dealers can find out more at www.ford-apprenticeships.co.uk.