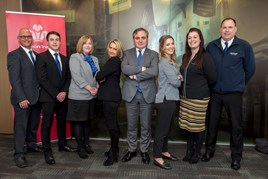 The competition sees teams of budding entrepreneurs take part in a Dragon’s Den style pitch to collectively raise over £1 million for the charitable organisation, and ten of Vantage's employees have taken up the challenge to contribute.

Team Vantage will kick-off its effort to raise £10,000 profit in six months after pitching its business plan to the ‘dragons’ and successfully securing £1,500 of seed funding.

The 'dragons', made up of Vantage chief executive Mark Robinson, Gordons LLP business development director Jo Williamson and Olivia Jeffrey from The Prince’s Trust, quizzed the team’s business plan to ensure its robustness before being satisfied enough to grant the team with the seed funding.

Robinson said: “Team Vantage pitched a compelling business plan with confidence and commitment, demonstrating sound commercial acumen throughout, even during the rather challenging dragon-style questioning around the financials.”

Among the activities the team has planned are the design and sale of umbrellas and travel mugs, a Vantage team tour around its 25 dealerships, and various other fundraising initiatives including a Christmas raffle and individual centre challenges.

Now in its tenth year, the Million Makers initiative has raised over £8.3 million for The Trust since it launched.

Robinson said: “The real work starts now though as the team begins to turn its business plan into a reality.

"It will be a test of time management, project planning, communication and leadership for those involved and I look forward to watching and supporting them in their endeavours over the next six months.”