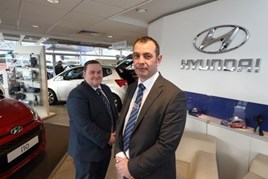 The pair worked together at Bristol Street Motors Exeter Renault and Dacia for four and a half years, before Goble left the business to work at another dealership.

Between them they delivered the best performing Dacia dealership in England.

Goble said: “I am thrilled to be back with Bristol Street Motors overseeing the Exeter Hyundai dealership. We have a fantastic new car sales offering, including the Hyundai Kona, with some great deals for our customers to enjoy.

“I am keen to get to know my fellow colleagues and am delighted to work alongside Dan again. He has taken advantage of every opportunity he has been given and brings the best out in his colleagues. I am sure he will be an asset to the team.”