Sister act at Furrows Group as it recruits five siblings 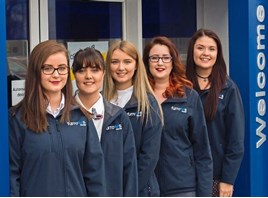 Furrows Group’s car sales operation is starting to look like a perfect sister act after the business employed the fantastic five Banks siblings in a variety of job roles.

The Telford-based franchised retail group first employed Charlotte Banks – now aged 27 – in 2007 and completed the recruitment of the entire, five-strong Banks clan when 21-year-old Sophie was enticed to follow her sisters into automotive retail at the start of this year.

Furrows' joint managing director, Dave Farthing, said that the Banks’ were a credit to their parents, adding that all five had proved themselves to be “hard-working individuals” and “a great asset to the company”.

Farthing added: “It really is great that we have all five sisters now working for us in various departments across two of our dealerships.

“It’s a fantastic testament to Furrows that not just one sister but all five have chosen to work for us.”

The various roles taken up by the Banks sisters highlights the range of potential job roles available to young recruits to the automotive retail sector.

Charlotte started work as a part-time Saturday receptionist before taking up a full-time role in the sales admin team.

In September 2017, the Furrows marketing team was restructured and Charlotte was offered a full-time position in the Marketing team based at the Shrewsbury dealership.

Emily joined the business in 2008, initially working at weekends on reception and providing cover when needed throughout the week.

In 2010 Emily joined the Accident Repair Centre in a full-time co-ordinator role, which sees her dealing with all administration aspects of vehicle repair work.

Emily has been employed by Furrows for a total of 10 years making her the sister with the longest continual service.

Jessica started working for Furrows as a part-time receptionist in 2010.

Molly has been working as an accounts apprentice since August 2017, in a role which gives her the opportunity to take on her AAT qualification (Association of Accounting Technicians) followed by her CIMA qualification (Chartered Institute of Management Accountants) all while gaining experience in the Accounts department in areas including sales ledger, purchase ledger and banking.