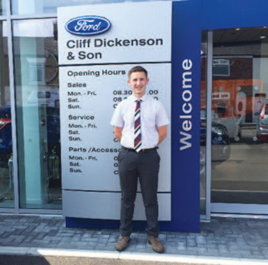 Waring joined the business two days after finishing school and has already started training for the launch of the new Focus.

Waring will attend a training day that involves a detailed walk around of the vehicle, including a hands-on product workshop. This is then followed by dealer staff being offered the chance to be get behind the wheel.

Waring said: “At the age of 17, I am extremely proud to work with Ford products and am really excited by the prospect of being a part of the launch of such a technologically- advanced new car.

“I am grateful to my boss, Chris Winward, managing director of Cliff Dickenson & Son, who has given me this opportunity.”

Waring is being trained as part of the the Ford Dealer Apprenticeship Programme (FDAP).

FDAP recruits over 500 Apprentices into the dealer network each year, with qualification success rates of 84% - above the national average.

Ford’s work with apprenticeships is in contrast to the wider industry that has seen take-up falling by 34% to 290,500, during the first nine months of 2017/18.

The DfE said at the time that the decline was “likely to be associated with the introduction of the apprenticeship levy in April 2017”.