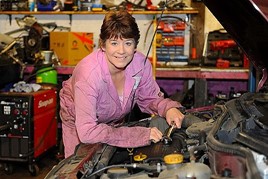 Women looking to forge a career in the automotive sector still face many of the challenges they did 30 years ago, say women now leading businesses in the sector.

AM’s research shows there are just 23 women on the boards of AM100 franchised dealer groups, where their most common roles are finance director, marketing director or HR director. Only two of the AM100’s managing directors are women.

At Automechanika Birmingham, a panel of influential women from the sector shared their experiences of working in automotive and their efforts to improve the retail and aftersales market for women customers.

The five-strong panel, which included a consultant, a director and a campaigner,  agreed that the sector still needed to change, despite efforts to employ more women in senior positions following the findings of the Government’s gender pay gap reporting exercise.

Caroline Lake, the founder of Caroline’s Cars, said she was initially pushed into a career in marketing – despite a love of hands-on mechanics – but founded a female-friendly maintenance business through sheer determination.

“I was working in marketing and started importing cars from Japan as a sideline,” she said.

“I really wanted to learn more about the cars I was working with – get my hands on again – but struggled to find any mechanic who would take on a female apprentice.”

Lake said she eventually persuaded the owner of a garage that she regularly used to take her on unpaid for a time.

She said: “I was the butt of a lot of jokes, but after I spent four years there, working every spare moment I could afford, I was eventually offered a job.”

Lake said her employer at the time had admitted entering her into the MOT qualification tests “as a joke”, but added that it soon became apparent her presence in the business had worth.

“Women would come to me to ask about their car and it became apparent that there was a niche for a female-friendly garage,” she said.

Lake founded Norwich-based Caroline’s Cars in 2004 and as well as providing servicing and MOTs in a female-friendly environment, she also coaches women (and men, as a result of popular demand) in basic car maintenance.

However, she said: “There was no encouragement for me to enter the sector. I believe that many young women looking towards a career in automotive now would face exactly the same challenges that I did 30 years ago.”

Consultant Steph Savill advises the industry on how better to employ women and deliver a better service for female customers and is the founder of the Foxy Lady Drivers Club, a not-for-profit online platform for approved garages.

Savill said: “There are 11.8 million women who own cars in the UK. We are known to buy half of the cars and influence 80% of sales, but what I hear from women again and again and again is that we fear being ripped off and patronised.”

Savill questioned the unregulated nature of the independent garage sector, in particular, and suggested that women wanted extra reassurances about the aftersales operations that they visited.

Jane Russell, co-founder of the London-based Russell Automotive Centre, agreed and has made it her business’s mission to make aftersales less intimidating for women customers.

She set up the business with her husband, a former Volkswagen master technician, and immediately saw the need for the focus on a female-friendly approach. Russell said the strategy has paid dividends and should be emulated by others.

She also believes the time has come for a greater influx of female employees into the automotive sector.

Russell said: “The developments in the sector right now dictate that the time is right to for more and more young women to enter the automotive sector.

“It’s no longer going to be about picking up a spanner, it will be about logging into a computer.

“That change is going to be great for women coming into the industry.

“Those getting on board now, perhaps through IT and engineering, are really going to have the opportunity to fly.”

Billing itself as “an automotive working group”, it is striving towards a goal of having 30% of key leadership positions in UK motor retail filled by women by 2030.
www.am-online.com/30CLUB

The IMI issues a call for more women to be recruited into the automotive industry.

It is US-focused, but this body runs an interesting mix of conferences and webinars, and its scholarship and awards programme may provide inspiration for UK dealers.