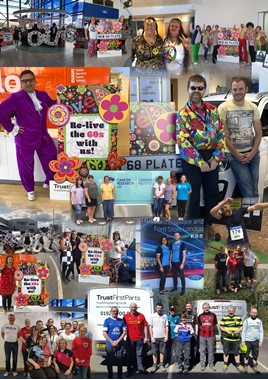 TrustFord colleagues participated in over 10 events across the UK, from May to August 2018, to raise money for a number of national charities, including Cancer Research UK, TrustFord’s official charity partner of 2018.

Other organisations whiach are local to dealerships and also benefited from TrustFord's efforts, included the Al-Noor Foundation in Essex and the Clatterbridge Cancer Trust on Merseyside.

The AM100 retail group’s chairman and chief executive, Stuart Foulds, said: “Supporting the local communities in which we operate is essential to TrustFord. It’s part of how we serve and understand our customers, and nurtures the collaborative nature of our colleagues.

"We are proud of our ongoing partnerships with nationwide charities such as Cancer Research UK, and of colleagues’ fundraising initiatives for organisations local to them.”

Fundraising activities for CRUK have been many and varied. In May, TrustFord Barnsley held its annual Performance Day, featuring a line-up of Ford’s classic and modern models. It raised £1,400, which was added to by a donation from the Enterprise Rent-A-Car Foundation.

Initiatives led by TrustFord’s CRUK Champions included a charity fishing match held at Messingham Sands near Scunthorpe, a 1960s dress up day across all TrustFord sites, and participation in the ‘walk all over cancer’ step challenge.

In Birmingham the ‘TrustFord Totties’ team raised £1,260 for CRUK by running the Race for Life with their children.

The TrustFord HR team also spent a day volunteering at CRUK, helping sort donated goods for distribution to charity shops, whilst other colleagues visited the Cambridge labs to better understand the charity’s work.

This sum was added to by a £1,000 donation from the Ford Retail Trust. The Trust also supported the Westbury Harriers’ Wipe Out, a fun run near Bristol, with a donation of £2,000.

Individual colleagues have also taken on a variety of sporting endeavours. For example, Tony Jones, a sales executive at TrustFord Warrington, raised over £4,000 for the Clatterbridge Cancer Charity by completing the famous Land’s End to John O’Groats cycle ride.

Jones cycled the 960-mile route supported by a custom Transit van from the Warrington TrustFord dealership.