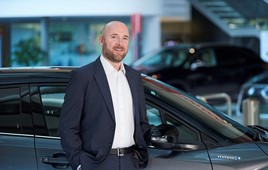 Toyota GB has appointed Stuart Ferma as its fleet operations general manager for the Toyota and Lexus brands.

Former fleet and vehicle remarketing general manager, Neil Broad, will move into the role of marketing communications general manager as part of the move which will come into effect on January 1.

Ferma has been with Toyota GB for more than 20 years, joining the company as a customer relations advisor and progressing through roles in sales administration, sales field management, network and channel development and customer retention.

Most recently he has been the company’s national fleet sales manager.

Ferma said: “I’m delighted to be moving into this new role. Our position in the fleet market has never been better.

“I am very grateful to Neil for the dedicated work he has put in and the great support he has given me over the years.

“With my move up to head fleet operations we are also maintaining continuity in the good relationship we’ve established with our customers.”

Neil Broad has also spent two decades with Toyota GB and has led the fleet department as general manager since 2012, Toyota GB said in a statement.

It added: “In his new role he will join the Toyota marketing communications team to help the focus on brand development.”