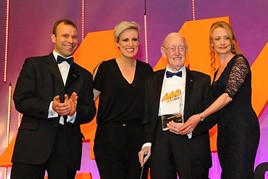 JCT600 founder and chairman Jack Tordoff has been presented with an OBE in recognition of “services to business and the community in West Yorkshire”.

Ed Anderson, HM Lord-Lieutenant of West Yorkshire, presented Tordoff with his award in at Bowcliffe Hall in Bramham, Wetherby, following his inclusion in Her Majesty’s 2018 birthday honours list in June.

Tordoff, now aged 83, built JCT600 from a single dealership on Sticker Lane in Bradford into one of the largest privately owned businesses in the UK.

Throughout a 68 year career he has received many awards, including an MBE in 2007, and has now been made an Officer of the Order of the British Empire (OBE).

Tordoff said: “I’m fortunate to have enjoyed a fantastic career and I am tremendously proud of what we have created at JCT600.

“To have now been given this award by Her Majesty is the ultimate honour and I believe testament to the hard work, grit and enterprise for which Yorkshire is famous.

“I am very grateful to the people who work with me every day, both past and present, and who have helped me to grow JCT600 into Yorkshire’s biggest private company and to achieve this honour.

“From the bottom of my heart, I thank them all – they are the best.”

Tordoff, who attracted a standing ovation from guests at the AM Awards 2018 when he received his Hall of Fame induction at the ICC in Birmingham in February, started his automotive career in the family garage as an apprentice at 15, shortly after the death of his father.

Initially, that meant fetching tea and newspapers for the mechanics and sweeping up, but before long there weren’t many jobs he couldn’t do.

Tordoff took a break from the business to complete his National Service, which might have led to a different life. He thrived in the Army and was encouraged to stay, but he honoured a promise to his mother that he would return to the garage, expanding its remit into car sales.

Today JCT600 is Yorkshire’s largest private company and ranks in The Sunday Times 100 Best Companies To Work For, with a £1.25 billion turnover.

The company has been the main sponsor for Bradford City for the last 10 years and also sponsors Bradford & Bingley Rugby Club. It is also a patron of The Prince’s Trust.

Tordoff added: “I am Bradford born and bred and have never lost sight of my roots or how important it is for successful companies to give back to their local communities.

“With my children and grandchildren now working in the business, I know that we will stick to the values which have set us apart and continue to always put the customer first.

“I remain a proud Yorkshireman, and never more so than today.”