Startin Suzuki parts manager to run over 1,500 miles for charity 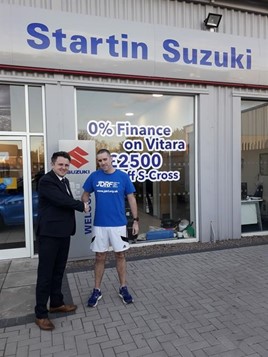 The cause is close to Pountney’s heart, as his eight-year-old daughter Ellie was diagnosed with the condition in 2017.

Poutney is no stranger to putting his body to the test, and has completed 150 miles of charity walks over the past five years, during which time he has raised more than £75,000 for several charities.

On average, the 40-year-old puts in 30 miles of training each week, and he started 2019’s incredible feat with the Gloucester half marathon road race.

Between now and December, he plans to take part in at least another eight events, where he will pound the streets in marathons up and down the country, in the light and dark, and undertake the notoriously gruelling Three Peaks Challenge in July.

Pountney said: “JDRF is a charity that’s very close to my heart, and through everyone’s combined fundraising efforts and continued medical research, a cure will hopefully be found, so that those living with type 1 diabetes, including my daughter, do not have to grow up with this terrible disease.

"It has taken many evenings and weekends to build up and maintain my fitness, and I could not have got to where I am today without the tremendous support of my family, friends and colleagues."

Startin Suzuki St Peter’s Worcester’s dealer principal Richard Eldridge said: “We wish Dave the best of luck as he embarks on his many miles of running, and we encourage everyone to make a donation, no matter how small, to what is an extremely worthwhile cause.

"Just like his work ethic, he has certainly put in the hours and shown exceptional dedication. I am sure that everyone will be very proud of Dave when they look back at the end of the year and see what he’s achieved.” 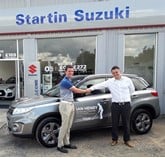