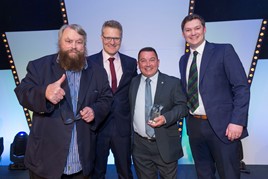 Aitken, who has worked at the dealership for more than two years and as a motability specialist for 25 years, was presented with his award as Vertu Motors inducted 27 new members into its Masters Club, which recognises colleagues from the Group’s 125 dealerships who have excelled in their role and delivered outstanding levels of performance.

The winners were chosen from nominations made by their colleagues and 2019 saw a record number of nominations submitted.

The award ceremony, held at the Queen’s Hotel in Leeds, featured colleagues from every area of the business, including drivers, valeters, apprentices, sales executives and administration colleagues praised for their performance.

They were treated to Strictly Come Dancing Star Anton du Beke tripping the light fantastic with Erin Boag and music from Killer Queen, the leading tribute act for Freddie Mercury’s iconic group as part of the night's proceedings.

But Aitken received his award from Flash Gordon and Blackadder star Brian Blessed.

Commenting on Aitken’s award, Vertu Motors’ Motability dealer development manager for Scotland, Lindsay Mackie, said: “For me there is no one else who deserves this recognition more, his passion and enthusiasm are commendable and he is always trying new things and getting out there in his local community to talk to as many people and organisations as possible to tell them about our great Scheme.

“Ali’s attention to detail and way with customers is first class he is one of the best specialists I have the pleasure of working with.

“Even from his hospital bed last year he was still making sure that his customers came first, and everything was taken care of for them, not to mention trying to sign up his surgeon’s relative, a truly deserving winner in my eyes.”