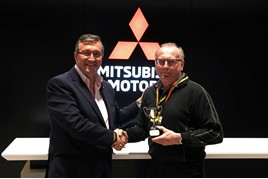 Mitsubishi Motors in the UK has awarded Park’s Motor Group technician Alan Williamson as its Master Technician of the Year 2019.

Williamson, who works in the AM100 retail group’s Ayr Mitsubishi dealership, emerged victorious from a competition held at the company’s head office in Cirencester, Gloucestershire.

He won a new 50-inch 4K TV and will now go on to represent the UK at the European Master Technician of the Year competition, held at Mitsubishi Motors Europe in 2020, an event which also forms the qualifying for next year’s world finals in Japan.

Over 140 participants took part in the events which opened for entries in September and was open to all Master Technicians in the OEM’s UK retail network.

The preliminary rounds consisted of online timed assessments and questions, from which the top scoring six finalists were ultimately selected.

The finalists then attended a one-day competition at Mitsubishi Motors in the UK’s in-house training academy in Cirencester where they completed a number of practical assessments before a technical quiz added to the points scored and decided the final results.

Commenting on his victorious performance, Williamson said: “I am thrilled to have won. The competition was a really tough test and I was against some really stiff competition from my fellow Master Technicians from the network.

“They are all great people with years of Mitsubishi experience, so to win ‘Master Technician of the year’ is a fantastic honour.”

Ray Watts, training manager at Mitsubishi Motors in the UK, said “The main reason for running the event was to find a Master Technician of the Year for the UK.

“This accolade is the culmination of many years training, e-learning and hard work in the dealer network.

Richard Weller, Mitsubishi Motors in the UK’s director of aftersales, added: “All of the finalists should be very proud to have achieved this level of success, especially Alan who has shown a truly outstanding level of excellence.

“I hope that this competition will inspire more of our technicians within the network to accomplish Master technician qualification status and compete for this prestigious title in the years to come. “