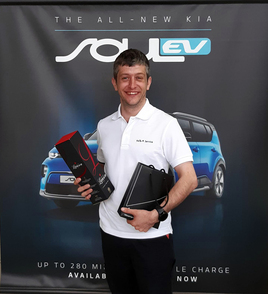 A technician from Snows Kia Guildford has been crowned world champion in the Kia EV Skill World Cup 2021.

David Weston, 39, qualified for the World Cup after winning gold in the Kia UK Skill Cup in February 2020.

He represented the UK against Kia technicians from 15 other nations, in two days of intensive online testing by the Osan Training Center in Seoul, South Korea.

Weston, a self-confessed motor ‘junkie’, clocked up 120 hours of Korean language study in his spare time to help with his presentation skills.

The competition comprised of a Powerpoint presentation, a multiple choice test and then a detailed diagnostic test, all carried out remotely via video link from the Kia Academy in Nottingham.

Weston joined family-owned Snows in 2015, after 18 years with the same independent garage where he trained as an apprentice.

He said: “I felt pretty confident throughout the competition because I had put in so much hard work.

“Even so, during the final ceremony when they announced the bronze and then silver winners to fanfares and drum rolls, I knew I had either won the whole thing or completely blown it.”

Neil Mccue, Snows’ chief operating officer, added: “David’s craftmanship, attention to detail and utter commitment to his job is already well known at Snows and now the whole Kia global service community has recognised it too.

“To have learned Korean to improve his communication with his testers shows just how far he is willing to go to develop his craft.

“I have watched the video of the awards ceremony and it was so exciting to watch. To see David’s ecstatic reaction was priceless.”