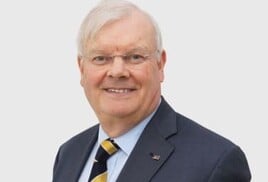 This year’s AM Hall of Fame inductee, Professor Richard Parry-Jones CBE, has had a huge impact on the automotive industry.

Having started as an undergraduate trainee at Ford, he rose through the major manufacturer’s ranks in a career spanning almost 40 years, involving global roles and culminating in attaining the post of chief technical officer.

During those decades Parry-Jones rebuilt the OEM’s reputation into one of everyday, accessible cars but with incredible driving dynamics.

The Welshman coached generations of engineers who now create fantastic cars across the globe.

Appointed a CBE by HM The Queen in 2005 in recognition of his services to the automotive industry, he retired from Ford in 2007 and in subsequent years became involved in a variety of organisations and companies in advisory and non-executive roles.

Identified as a candidate for non-executive chairman of the board at the growing national motor retailer Marshall Motor Holdings, our inductee was “the stand-out choice” according to its chief executive Daksh Gupta.

Joining the board in January 2019, Parry-Jones mentored Gupta and his executive team, and was “constructively challenging, but respectful” of the business’s history and performance.

After the COVID-19 pandemic struck, a nightly ‘virtual beer’ call between Gupta and Parry-Jones – who was isolating at this point – became the perfect sounding board for work and life challenges in such unprecedented times.

Since their first meeting they had “clicked”, Gupta said, thanks to shared values and passions, including for the same cars and Manchester United Football Club. Yet the pandemic now brought them into a close friendship.

Described by colleagues as having “high integrity and immense knowledge”, our inductee’s influence on Marshall is still there such as his focus on putting health and safety high on every board meeting’s agenda.

Parry-Jones died in a tragic accident involving a tractor earlier this year.