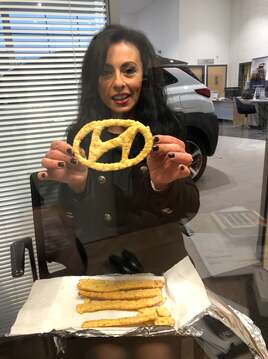 The twin sisters, who were in the pop charts as The Cheeky Girls in the early 2000s after competing in Pop Stars The Rivals, both now work in sales at different Hyundai dealerships.

And they told the Sun on Sunday and the Daily Mail that they love the job so much they have an ambition to run their own dealership one day.

"We both enjoy the work,’ Gaby, who works at Minstergate Hyundai in York, told the Mail.

"I’ve got a passion for cars, so it’s not just the selling bit, but I like the buzz of selling and making people happy."

Monica, who has worked at the Read Hyundai dealership in Boston, Lincolnshire for some time and since marrying has the surname Taylor, said: ‘What we are doing came from a long discussion with me and Gabi, because we accept that The Cheeky Girls is not going to go on for ever."

The sisters still perform and consider motor retail as a "parallel career".