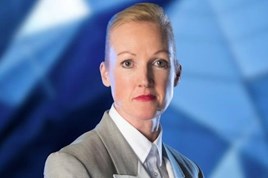 Former apprentice favourite Ruth Whiteley is aiming to eradicate “tired salesmanship” in UK dealerships as part of a husband-wife training team with her husband.

And the 47-year-old mum-of-one, who claims that she was unjustly fired by Lord Sugar after a failed challenge which saw her and fellow contestants attempt to sell scratching posts for cats on the hit BBC series, says that they are  ideally placed to produce sales staff who remain “enthusiastic in the face of ‘nos’”.

The co-director of Harrogate-based Impact Sales Training said: “I think the automotive industry suffers due to sales staff that are perhaps unwilling to learn new things and only target people they identify as ‘buyers’.

“In the current climate you have to know how to deal with people and pursue every lead with vigour, often on the phone or via email. Things have changed and attitude and the sales process are the keys to success.”

Whiteley – renowned for her colourful attire – describes herself as “outgoing and bombastic” and said that the high point of her time on the apprentice was Baroness Brady said that her sales technique while trying to sell fishcakes was “creepy but highly effective.”

She said: “I don’t think she had ever met somebody from Yorkshire before. If approaching people and trying to start a conversation and generate interest is creepy, then so be it.”

Whitely is a former employee of Lancashire-based Pendle Performance and husband Andy – a former professional footballer with Halifax Town – spent time in the motor trade as a salesman with Evans Halshaw.

The pair founded what Whiteley described as “Yorkshire’s first used car supermarket” on Leeds Road, Huddersfield, and spent a decade operating the site before selling it into the Honda franchise network in 2004.

They have been providing sales training, with a focus on automotive ever since, with Whiteley mainly working to capture business and her husband carrying out the training and guaranteeing results to clients.

Now their business is in a state of growth and recently took on its own apprentice, with training contracts secured with Mercedes Fleet and Essex-based Big Cars Ltd.

And Whiteley’s vigorous sales technique is reflected in the enthusiasm with which Impact chase new business. She said: “We do act as secret shoppers quite often. Often when we make our return visit and discover our finding people say ‘oh, so-and-so has left now’ or ‘he’s not always like that’, but either way it is an effective way of identifying shortcomings in the sales process.”

Whiteley said that Lord Sugar was wrong to fire her after supposedly identifying shortcomings in her selling technique.

She insists that she did sell cat scratching posts at the two-day sales event that was part of her fourth-week challenge in last year’s series, but said: “Everyone you sell to has to sign a disclaimer to say they will be included in the series and those I sold to didn’t. As a result I was marked down as having sold nothing. It was unjust… I suppose that’s reality television, though.”