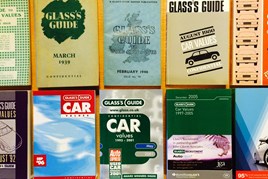 The final print edition of Glass’s Guide will come off the presses next month after 83 years and 925 issues of continuous publication interrupted only by the Second World War.

Glass’s subscribers will have to access all their car valuation information digitally through the Glass’s Guide App – a switchover process that has been under way since 2014 – after the publication of the August 2016 issue.

Rupert Pontin, Glass’s director of valuations, said that the decision to stop publishing the printed edition had come “long after the point at which it was economic to do so”, adding: “Just a handful of subscribers were still taking the printed guide”

He said:  “The image of the car dealer leafing through their Glass’s Guide at a motor auction or on the forecourt is very much etched into the public consciousness.

“However, the truth is that the vast majority of our subscribers have been accessing our information through smartphones, tablets and PCs for some time.

“They do this for very good reasons – the Guide App contains four times the number of car valuations, alongside easy mileage adjustment and registration lookup.”

The rate at which customers have already adopted the Glass’s Guide App – which works on Android and Apple devices – has been rapid following its launch in 2014, Pontin said.

He said that he believed that William Glass, the original publisher of the Guide born in Scotland in 1881, would have approved of the App.

Pontin said: “William was very much a forward thinker and a notable inventor who created the portable hydraulic jack, the electric switch-off kettle, the self-filling fountain pen and the through-the-propeller machine gun firing mechanism. I’m sure he would have been fascinated by our digital world.”

Glass’s have taken the end of its print run as an opportunity to complete its archive of past editions.

Pontin appealed to anyone who had copies of six missing issues – dated July-August 1933 – to get in touch.

AM Poll
How has the COVID-19 pandemic affected your attitude or mental health? Please leave a comment
Vote
View all
990