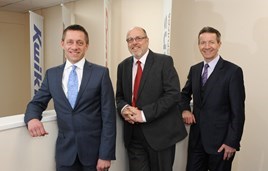 Lucas said: “A number of new fleet initiatives have been launched in the last two years, including most recently Fleet Web Bookings, and Tannochside has been central to supporting those developments.

“Kwik Fit has a number of exciting new customer-focused initiatives planned for launch over the coming months and years and their development will result in an expansion and enhancement of the range of services offered through Kwik Fit’s Customer Support Centre.”