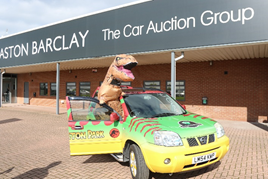 Two teams from Aston Barclay will get their teeth into an epic Alpine road trip in a brace of 13-year-old Nissan X-trails taking inspiration from roar-away movie success Jurassic Park.

Leaving on October 7th, the Bangers4Ben cross continent challenge will see team members cover approximately 1,500 miles in a bid to raise funds for the charity which supports those working in the automotive industry and their families.

Aston Barclay’s CEO Neil Hodson and his colleagues Gary Jonson, Rob Wittridge and Ian Winn have signed up to compete.

Hodson said: “We are so excited to get on the road. This weekend will be such a wonderful experience and of course we are raising funds for an incredible charity.

“Like most other entries we are just hoping our bangers are going to make it there and back without breaking down.”

Aston Barclay will be competing in two Nissan X-Trails which were bought for £500 which have been decked out in a Jurassic Park-themed livery.

One team member will even dress up as a Tyrannosaurus Rex.

This years “Alpine Special” banger rally will see teams drive to the Swiss Alps and back.

The four-day trip will see teams drive from Dover to Strasbourg, France on Day 1.

Day 2 they will then travel to Davos, Switzerland. Then day three and four will see teams head back to England.

When the teams return to the UK, the final rule is that they sell their bangers at auction for the charity.

To support the Bangers4Ben event, donations can be made here: https://www.justgiving.com/fundraising/astonbarclayb4b17