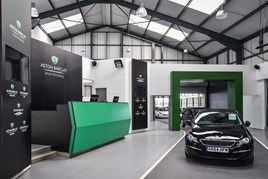 Aston Barclay has unveiled plans to expand its Westbury auction facility with the creation of a second hall after Wessex Garages and MotoNovo became new vendor customers at the site.

Wessex Garages, which represents six manufacturer brands based in Wales and the South West, has signed a solus deal to dispose of part exchanges at Westbury’s new weekly Wednesday dealer sale which launches on March 21.

MotoNovo has also signed up to the new sale which will offer 300 dealer part exchanges, finance repossessions and ex-PCP and PCH cars.

An existing weekly sale at the Westbury site, which already includes vehicles from Alphabet, Venson, Addison Lee and LeasePlan, will remain on a Tuesday.

The site’s fortnightly light van sale has moved to a Thursday and a monthly Mercedes Benz sale will be held on the last Friday of each month.

“Its unique digital buying app will provide a key source of used stock across our network.”

Plans are now being drawn up to reposition the inspection bay to accommodate a second auction hall to cater for increased volumes in the future.

Aston Barclay chief executive Neil Hodson said: “The £750k investment in refurbishing Westbury in 2016 helped fuel growth in the eight-acre site and we are now looking at further improving the site’s efficiency to cater for new vendors, building on the foundations of Westbury’s strong reputation for service and results.”