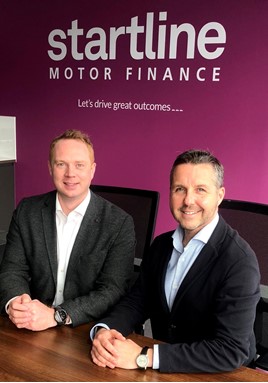 The company’s new premises is more than twice the size of its current headquarters and is located within Glasgow’s Skypark development.

Startline now has 85 employees, including its recently appointed head of IT and Digital and head of Business Intelligence, alongside a range of other new roles.

Chief executive, Paul Burgess, believes the additional space should see Startline through its next phase of development.

“The last 12 months have been transformative for the company," he said "We are now working with a wider variety of dealer groups and online portals, giving us access to many more potential customers.

“Also, we have extended our product range beyond our core hire purchase product to add PCP and Finishline, which is designed to extend the reach of our flexible prime concept.

“Looking into 2019, we foresee further, similar growth and the new move gives us the space and the physical infrastructure to enter that phase of development,” he said.

Since being established five years ago, Startline has specialised in products that are designed to be used when a mainstream prime lender rejects an applicant.

Finishline, which launched in June, is being targeted at used car buyers who narrowly fail to meet the company’s current lending criteria but are still considered to be good quality applicants.