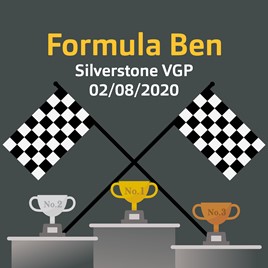 Ben is urging charity-minded automotive employees to complete the British Grand Prix’s full 190-mile race distance under their own steam as part of a Formula One-inspired virtual reality fund-raising challenge.

The automotive benevolent charity is asking volunteers to challenge themselves to complete the equivalent distance of 52 laps of the Silverstone race circuit in any way they like – be it running, cycling, swimming or rowing – in the next eight weeks as it looks to boost its coffers to meet the challenges of the COVID-19 crisis.

Ben revealed last month that it had been left with a 2020 fund-raising shortfall of around £1 million after the pandemic forced it to cancel its annual Ben Ball charity event for the first time since World War Two.

A virtual reality platform has been set-up to allow participants to track their progress around the race’s 190-mile distance around the Silverstone Circuit as they participate in the eight-week event, which is set to get underway on August 2.

“In the current landscape, we had to adapt quickly and come up with new ways of fundraising because mass participation events can’t physically take place right now.

“So, Formula Ben Silverstone VGP is a fantastic way to have fun and raise money so we can continue providing life-changing support for automotive people – which is needed now more than ever.

“We’re supporting more and more people with their health and wellbeing during this challenging time, so we need to make sure we can help them get back on track, which we can only do by continuing to fundraise.

“We hope you’ll be part of something amazing and Bring It On 4 Ben by getting involved.”

Registration to the Ben Silverstone VGP costs £15 per person and each participant will receive a Ben T-shirt.

On registration, participants can download the progress tracker app, link to their fitness tracking device and join the leader board for some healthy competition.

In addition, taking part in the challenge offers people the opportunity to connect with others and be involved in something fun, while supporting Ben to help automotive people get back on track for good.

The charity said that more virtual fundraising events are set to take place throughout 2020.

To find out more about the Formula Ben Silverston VGP, or register to take part, click here.