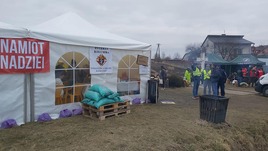 Two UK motor retail veterans are appealing for essential kit to help fill vans they're sending to a Polish town inundated with refugees from Russia's war on Ukraine.

Ford and Jones are coordinating to ensure the supplies will be boxed and labelled correctly, which is one of the measures required to get through France's customs processes.

They are appealing for an automotive business with unused warehousing or storage space to allow the donations to be gathered in one central place.

"Zamosc is a town with a population of just 15,000. Now around 800 refugees are arriving daily from the Ukraine by train," said Ford.

Their friend Steve Taylor, who was a director of London-based M&A Coachworks until 2012 when he emigrated to Poland to teach English, will help distribute the supplies on the ground in Zamosc.

He has also set up a JustGiving page here.

In a Facebook video yesterday Taylor was visibly emotional as he described the scene in the town, and the despair of the refugees arriving.

Items that are needed urgently:

Ford added: "The town has no infrastructure to cope with the influx; the local petrol stations have run dry and there's no cash left in the ATMs. This makes moving the refugees on to their next destination more difficult - hence why these items are needed to make life more bearable.

"There are no sleeping bags left in Poland's shops by now."

She said the refugees now arriving have walked from the Ukraine with just what they could carry, and many speak neither Polish nor English.