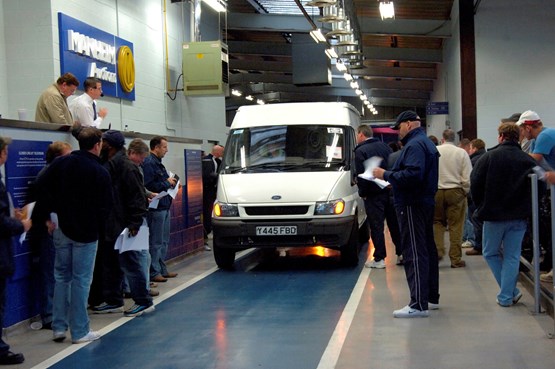 Auction company Manheim  saw a record number of vans in its sales in June, which was a strong month for average selling prices and conversion rates.

Matthew Davock, head of LCV at Manheim, said: “As I have been predicting all year, summertime seasonality has begun to impact the van market. With stock shortages in the last two years ramping up demand, the impact of seasonality has been minimal. However, for many of us who have witnessed historic seasonality over the last ten or more years, what we are seeing right now is not unusual in the van world.

“June’s record month-on-month sold volume spike proves the market is still in rude health, but duplicate stock and damage are the issues impacting conversion rates. I would encourage all vendors to prepare, price and engage with Manheim to get our expert views around the market and other vendors week-by-week.”

The average age of used vans in the market decreased slightly (1.5%) as mileage increased by a small amount (2.4%), reflecting the 20% increase in daily rental stock seen in the auctions.

Large panel vans performed well in June, particularly in terms of average selling price, as there is still a shortage of stock available in this sector.

Units below three tonnes made up just 6% of volume last month, with a steep increase in selling prices of 14.9% compared to May.

Market performance in June was focused on two market sectors, the car-derived van sector and the small panel van sector, which together made up 59% of total volume.

Prices for small panel vans were up 8.2% from May, in line with the used commercial vehicle market as a whole.

James Davis, director of commercial vehicles at Manheim, said: “Overall vehicle condition remains critical in the used van market. With increasing volume in the marketplace, buyers have the luxury of being able to pick and choose their stock and they are buying on condition.

“Damaged vehicles do not pose a problem if the reserve price has been adjusted accordingly, but buyers are quite understandably not attracted to tatty or poorly maintained vans, they demand provenance, timely informed decisions and professional engagement by both vendor and auction house.”

Davock said: “Over the next three months, vendor representation at all sales is crucial. Buyers are looking for this support from the rostrum, and those vendors who are walking their vans per-sale, adjusting their reserve values, up as well as down according to their own and other vendors’ vans will be rewarded with maximum buyer commitment and market-leading conversion rates.”

AM Poll
Do you expect battery electric vehicles to still require an annual service? Please leave a comment.
Vote
View all
340