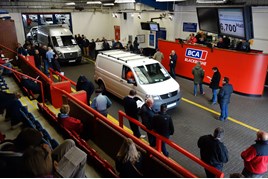 Fleet and lease values increased by £228, dealer part exchange stock rose by £32 to the highest point seen this year and the average value of nearly-new stock rose by £707, largely as a result of changing mix in a low volume sector.

"The market was strong in September with average values increasing across the board and good levels of demand from buyers for well presented, good quality commercial vehicles.”

Ward said, however, that BCA is continuing to see a large number of vehicles in poor condition and it is having a significant impact on price and conversion rates.

The difference in average value between a condition 5 and a condition 4 van is several hundred pounds and around 12 percentage points when compared to CAP.

Average part-exchange LCV values rose for the second month running, up by £32 (0.8%) to £3,842 – the highest monthly value recorded this year. CAP average comparisons fell back by a point to 101.1% but remain ahead of the fleet & lease sector. Year-on-year values were ahead by £264 (7.3%), although CAP performance declined by three points over the year.

The fleet and lease sector recorded average values of £6,416 in September, an increase of £228 (3.6%) over August and the first monthly rise in values since March of this year. CAP performance rose marginally to 99.3% and retained value against MRP (Manufacturer Recommended Price) imoproved slightly to 33.95%. Year-on-year, values were down by £134 (2.0%), with performance against MRP down by more than two percentage points.

Nearly-new LCV values averaged £14,152 in September – an increase of £707 (5.2%) compared to August. As always, this has to be taken in the context of the very low volumes reaching the market and the model mix factor, as well as the continuing availability of ‘new shape’ models reaching the used market.