Alternatively fuelled cars are showing the highest year-on-year price increase in the used market of all fuel types. The average prices for diesel cars has fallen below petrol for the first time.

Launched this month, it tracks the market value of all cars advertised by retailers on AutoTrader.co.uk.

Diesel model volumes have been rising, increasing the diesel market share by 0.23% - with petrol cars decreasing at a rate of 0.59%.

Prices for alternative fuel cars have risen this year on average by 6.5%, which is largely due to a combination of increasing demand and marketplace model mix.

In response to the increase in market share, diesel models were the only fuel type to decrease in price, with buyers reportedly paying £124 less on average for diesel cars compared to 2014.

This shift brings diesel price averages below petrol for the very first time, a result of more diesel models entering the market and the overall market share for petrol shrinking.

Karolina Edwards-Smajda, Auto Trader retailer and consumer products director, said, “One of the most interesting observations for the year-on-year November period has been the rise in market share of alternative fuel vehicles, giving the industry more insight into the UK’s growing appetite for electric and hybrid vehicles.

“There’s been a big drive from most of the manufacturers to launch desirable alternative fuel cars which is set to grow further, only recently Ford announced its plans for large-scale investment into this area.”

Hybrid cars are depreciating the least initially compared to other fuel types, but trends are showing signs of depreciation eventually levelling out at rates similar to petrol and diesel models.

Edwards-Smajda said: “Despite the positive outlook for hybrid car depreciation, we are seeing very different trends with electric vehicles, as the latest data shows electric cars depreciating at much higher rates – especially within the first two years – losing value much quicker than hybrid, petrol and diesel cars.”

Of the diesel versus petrol value movement, she said: "The supply of diesel cars has increased to the point where volume numbers are very close to petrol. The supply and demand relationship has caused the drop in diesel values." 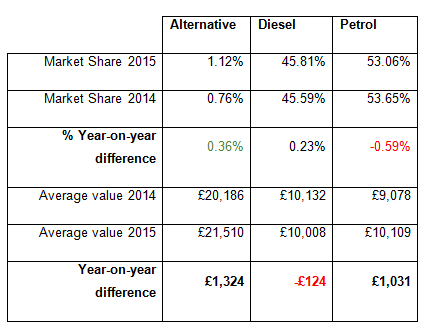