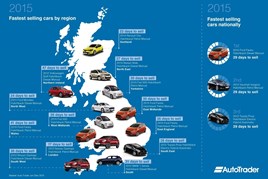 Ford’s Fiesta hatchback emerged as the UK’s fastest selling used car as Auto Trader released details of the 10 vehicles which found new owners most quickly during 2015.

Normally released on a monthly basis, Auto Traders figures for the whole of 2015 have been broken down by region and the Fiesta came out on top – taking an average 29 days to sell.

The Vauxhall Insignia and Toyota Prius were second and third respectively, both also taking 29 days to sell and making 2015 the first year in which an alternatively fuelled vehicle had featured in the top ten.

The Vauxhall Corsa appears in the top 10 in nearly all regions, in most cases; more than once.

Ford was the most popular fastest selling marquee overall, though, with Fiesta and Focus models appearing in every regional top 10 list for 2015.

Karolina Edwards-Smajda, Auto Trader retailer and consumer products director, said: “2015 has been a phenomenal year for Ford, topping both the new and used car lists with its Fiesta model.

“The versatile and economic hatchback is likely to only increase in popularity as Ford announce plans to make their vehicles even more efficient at the Detroit motor show last week.”

The North East remained Nissan territory as the Note took first and third places, the Juke fourth and the Qashqai fifth.

The Qashqai continues to be a popular choice amongst car buyers across the UK, placed sixth in the national top ten, and taking just 17 days to sell to be the fastest selling used car in London.

Here is a breakdown of Auto Trader’s top 10 fastest sellers of 2015: