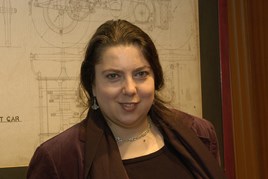 The National Association of Motor Auctions said that an “increasing level of supply” had led to a 35% uplift in used van sales through its members in 2015.

The record year for new van sales, which saw an all-time record of 371,830 registrations, saw twice the year-on-year increase in used van sales with NAMA members benefitting from a 15.6% rise.

Louise Wallis (pictured), head of NAMA, said: “The success of the new van market appears to have seen many franchised dealers focus their activity on the new two year market.

“As a result, we have seen evidence that they have traded more older part-exchange vehicles, some of which they may have retailed in recent years.

“Similarly, more fleets opted to dispose of vehicles through NAMA members that they had run for longer periods during the economic downturn.”

Wallis said that NAMA members saw the average age of stock increase and a spike in stock in the four to six year age range.

She added: “Importantly for the wider market, successful marketing activity saw demand for the stock on offer largely keep pace with the increase in volumes coming to market, albeit December data does reveal a 5.7% fall in first time conversion from the same period in 2014. It is too early to reflect that this is simply a seasonal issue.”