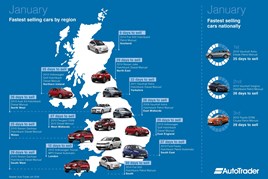 Vauxhalls were flying off forecourts during the first month of 2016, with the Astra Estate and Insignia taking first and second fastest selling car titles for January 2016 – selling in 25 and 26 days respectively.

The 2015 fastest selling car of the year, the Ford Fiesta, dropped out of the national top ten, but featured in nearly every regional list.

Nine out of the top ten fastest selling vehicles were sold with manual transmissions, and six of the top ten were larger model variants – specifically estate, SUV and MPVs – with an equal spilt between petrol and diesel vehicles.

Nissan models appearing in nearly every regional top ten, with the Qashqai model featuring three times in the top ten for London, and topping lists in South West and Wales.

The Fiat 500 appeared in nearly every regional top ten list– topping lists in Scotland and the South, while customers in the South East were eagerly preparing for some winter weather as they snapped up Land Rovers.

Auto Trader claimed that its i-Control system is continuing to give dealers a better than 50% increase on stock turn, with those using the tool turning stock within an average of 36 days, compared to a whole market average of 73 days.

Auto Trader estimates that over 52% of all cars on the classified website are not well matched to local demand but i-Control will track live market movements and recommend stock to buy.