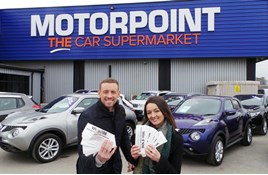 Car supermarket operator Motorpoint has teamed up with East Midlands radio station Gem to give away £106 to its listeners every week day throughout 2016.

The UK’s leading car supermarket is sponsoring the radio station’s Car Sticker feature on the Breakfast and Early Evening shows as part of a promotion aimed at driving footfall to its Motorpoint Derby outlet on Pentagon Island.

Listeners to the radio shows – which air on 106 FM – must collect a Gem window sticker from the car supermarket, stick it in their car window and then tune into the shows to find out if their car registration is read out live on air to be in with a chance of winning.

Satvir Atwal, general manager of Motorpoint Derby, said: “We are all avid listeners of Gem during the week so we jumped at the opportunity to team up with the station to support its car sticker promotion.

“It’s a great fun and it’s great to give something back to Gem listeners, many of whom are also Motorpoint customers.”