The Kia Sportage was the UK’s fastest selling used car in March.

The second fastest selling car, the 2013 model year Kia Sportage manual, took just 18 days from going on a dealer’s stock list to finding a new home with a buyer, according to Auto Trader.

The Sportage is joined by the similar-sized Hyundai ix35 (UK’s eighth fastest seller) and the premium offering from BMW in the shape of the X1 (ninth fastest seller), with both models taking just 22 days to sell.

Karolina Edwards-Smajda (pictured), Auto Trader retailer and consumer products director, said: “It’s clear that the Kia Sportage is a big hit with used car buyers and it’s not surprising given how popular the new one is. When Kia launched an all-new version of the model at the beginning of this year it ranked ninth in the top 10 best-selling new cars in February and secured record orders, pushing Kia to a record new car market share of 3.46% in February.

“Clearly it’s had a knock-on effect on used models too.

“The Ford Fiesta is in-demand across the regions too.

Stephen Kitson, communications director at Kia UK, said: “The Kia Sportage is the car every dealer wants to put on their forecourt thanks to a turnaround time that is half that of any other car.

“The Sportage has been the most in demand approved used car in the network and we know it has been a great success in the past year. We expect this to continue thanks to the outstanding success of the new Kia Sportage”.

The top five fastest selling cars in London were all BMWs

Another model performing strongly across the regions is the Ford Fiesta.

It proved to be the first, second, seventh and tenth quickest seller in the East Midlands, as well as second and third in the North East, and it was first, fourth and seventh in Northern Ireland.

In total, the Ford Fiesta appeared in eight of the region’s top 10 quickest selling cars.

Edwards-Smajda said: “Consumers are more informed than ever and know when a car is not priced right, so retailers should price their stock in line with the live market, and regularly re-price it to ensure a quick and profitable sale.

“Our data shows that more than half the stock advertised on Auto Trader isn’t optimally priced, so retailers aren’t maximising response from potential car buyers negatively impacting their speed of sale.” 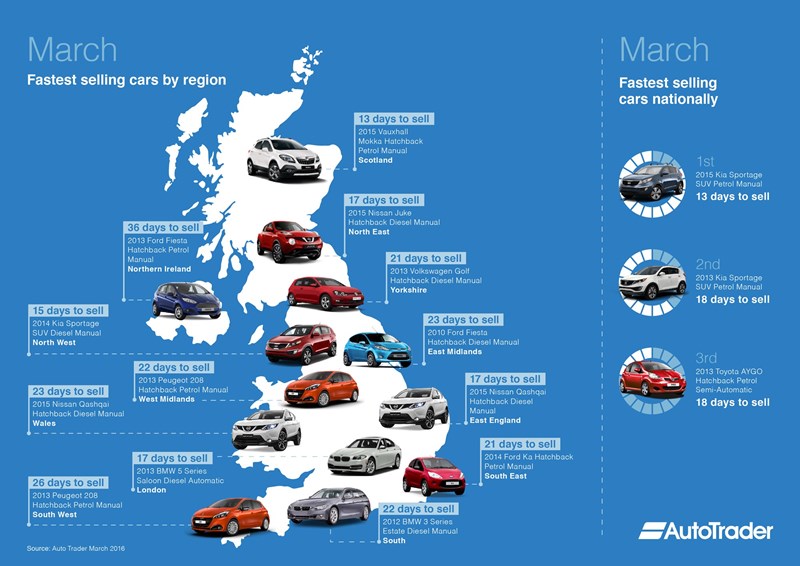