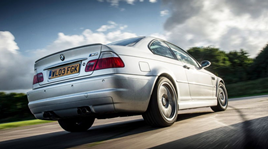 Each month, Glass's editors name the current hero in the UK market - the model they believe currently offers outstanding value, quality and ability.

On September’s Andy Cutler, forecast values editor, said: "This generation of M3 was recognised as very special from the moment it went on sale in 2000 and is fast becoming recognised as a classic.

"It had an absolutely fantastic straight six engine that produced 338bhp, capable of pushing it from 0-60mph in just 5.1 seconds with a limited top speed of 155mph.

“Even by today's standards this is still great performance and it also sounded fantastic with a wonderful raspy growl."

He added that the M3 (pictured) was now available at very competitive prices from both BMW dealers and specialists, while running costs tended to be low.

"A good example is now around £11,000, which is a superb price for a car with this level of ability. Also, servicing is relatively cheap. It's something of a bargain."

> This model is one of the best-loved M3s and holds a very special place in the hearts of any petrolhead that ever had the opportunity to drive one.

> What’s good? Supercar performance, great fun to drive and still a great track car if you are that way inclined. Also relatively, it's cheap to maintain and run for a car with this level of performance. Servicing is around £200 a time.

> What’s bad? There were some crankshaft problems on earlier models. Many were repaired under warranty, so be careful to check the history or expect a bill.