Record sales volumes in the used market predicted this year

Strong demand will lead to record used volumes this year.

The industry “shrugged off concerns” around Brexit with June – the referendum month - beating the same month last year, with over 632,000 vehicle sales, a rise of 0.5%.

Yesterday, it was revealed the new car market in September achieved a record high with 469,696 units registered, a 1.6% year on year rise.

A strong first half of the year saw used sales jump 5.9% in the second quarter of 2016 against the same period last year.

A total of 2,008,439 vehicles were sold with prices underpinned by strong consumer demand. The performance over the quarter was strong despite a sharp decline in activity in June.

“The trend looks set to make 2016 a marquee year, up 5.5% on a blockbuster 2015. While recent predictions from the SMMT set some doubt about the new car market in 2017, the used market has much to feel bullish about.”

Cap HPI recently reported demand for quality used cars remarkably strong throughout September leading to a stronger than normal market, with overall price reductions at three years 60,000 miles of only 0.2%.

“Both a strong new and used market has helped drive the growth of dealer groups, expansion of Supermarkets and independent operators. It is likely the used market will become an increased focus into 2017.” 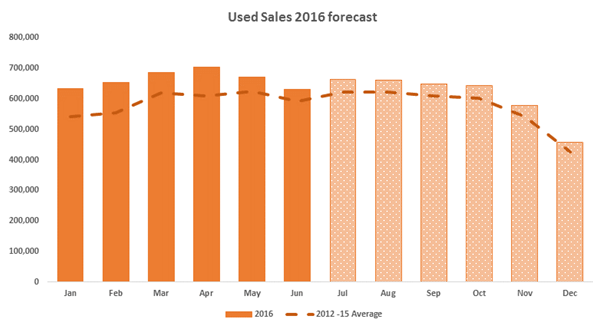