Current volumes of pre-registration in the city car sector are far lower than at the same point in 2015.

This is less severe than experienced at the same point last year where the performance was down by 4.2% and 3.9% respectively, it said.

James Dower (pictured), senior editor Black Book at Cap HPI, said: “City car tends to be affected by new vehicle activity and has, historically, seen some volatility, most notably on nearly new values.  November saw this to a lesser degree than we have seen before.

“Despite the various complexities of the political landscape, the industry has coped with the additional volumes of used vehicles and retail demand has remained buoyant throughout much of the year.”

Overall values moved downward by 2% at three years 60,000 miles, which compares favourably to December 2015, which saw an average erosion of 2.6%.

Convertible and coupe cabriolets continued to feel the seasonal pressure and saw values decrease at the three years 60,000 point by 3.2%.

The SUV sector remained stable throughout the month and only saw a downward movement of 1.3% at three years 60,000 miles.

Retail demand continued to remain healthy for SUVs as the buying public appeared to continue the trend of moving into this sector.

The Nissan Leaf was a driver in this trend and saw values increase by 2.9%.

Dower said: “The improvement in performance of the EV could signal that the price point is now at a stage that used vehicle retail buyers are giving serious consideration to electric and understanding how they can work for them.” 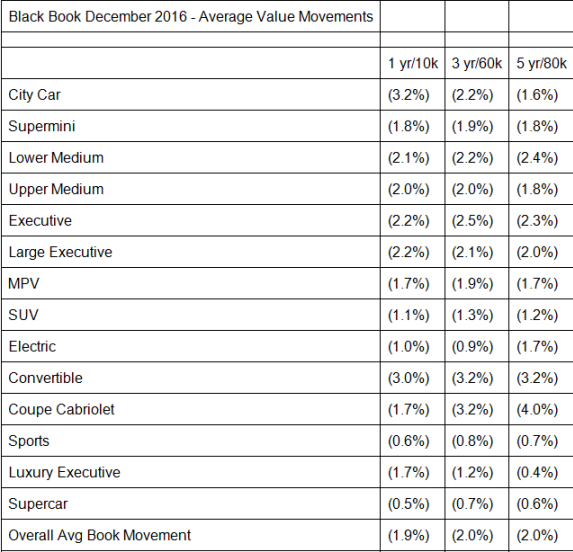