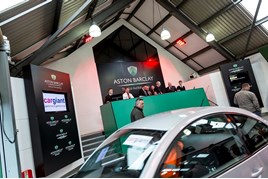 Aston Barclay has renewed its solus agreement with Cargiant in a deal which will see its site continue to handle the car supermarket’s part exchanges throughout 2017.

Building on the solus deal that was announced in January 2016 with Cargiant, after a decade-long relationship, Aston Barclay will continue to supply a complete remarketing solution for the used car supermarket through its Chelmsford auction site and digital channels.

Over 1,000 vehicles will feature prominently every month from Cargiant at Aston Barclay’s Monday evening and Wednesday morning auctions throughout the year.

A statement issued by Cargiant about the new agreement said: “We’ve been extremely impressed with the continued excellence of Aston Barclay’s service and performance. It was only natural to continue our existing relationship.”

24x7 operates specialist vehicles for the transportation of children with disabilities and learning difficulties to and from 17 schools in Essex, through county council-led schemes.

Saxton 4x4 will increase its presence further throughout 2017 at Aston Barclay’s Chelmsford site after volume doubled in 2016, compared to 2015.

Part-exchange volume from Braintree and Maldon-based Quest Motor Group will continue to feature on Monday evenings at Chelmsford, with all existing and new clients utilising the facilities at Chelmsford that include twin auction halls and dedicated inspection, repair and appraisal areas.

Aston Barclay’s additional new business volume represents a hugely successful period of growth for 2017, with Mercedes-Benz also committing to increased sales at Chelmsford and Westbury, in addition to its current sales programme at Prees Heath.