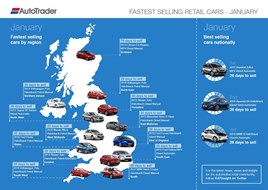 An all-electric car made the top ten of Auto Trader’s fastest selling used cars for the first time as the Vauxhall Zafira topped the charts for January.

The BMW i3 soared to third position in the online classifieds specialist’s monthly ranking of the markets most popular cars as the 2016 model sold at 97.29% of its recommended retail prioce for an average of £21,534, in 28 days.

Vauxhall’s Zafira was the UK’s fastest selling used car in January, however, taking an average of just 26 days to leave the forecourt.

Commenting in the BMW i3’s appearance in the Auto Trader fastest-selling rankings, Karolina Edwards-Smajda, Auto Trader Retailer and Consumer Products director, said: “The introduction of an all- electric car into the fastest selling list is a very significant development as it demonstrates how the level of technology adoption by consumers is increasing; technology isn’t only influencing the way we buy cars, but also what we drive.

“With the technology and public perception of EVs improving every day, I’m confident we’ll see more of these cars feature on our top ten lists in the near future.”

Across the regions, the 2013 Citroen C4 Picasso MPV Diesel Manual was the fastest selling car for Scottish dealers to turnaround, taking an average of just 19 days to leave Scotland’s forecourts.

While an MPV may have taken the national and Scottish top spot, it was the little hatchback that dominated January’s used car market elsewhere.

The ever popular VW Polo was the most sought after, scooping three number one titles (South West, North East and Northern Ireland). 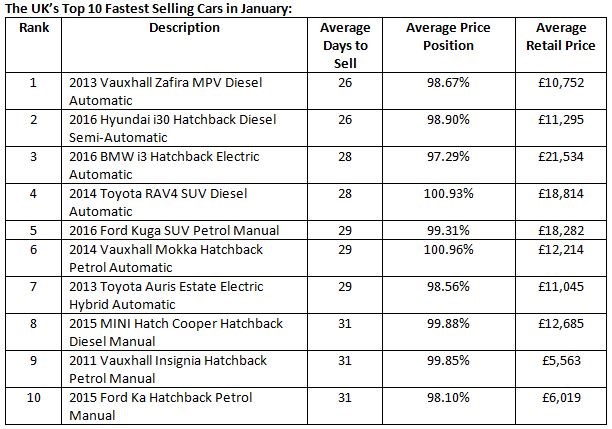