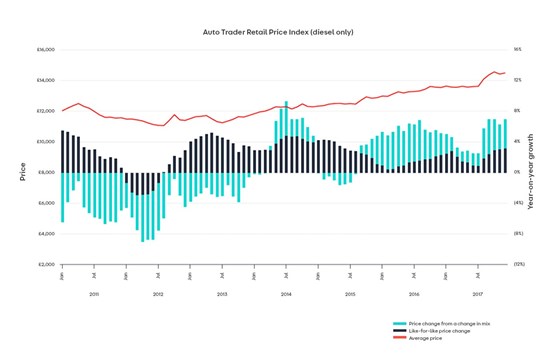 Prices for used diesel cars rose by 2% in 2017, despite the dramatic shift towards petrol seen in the new car market.

Despite a 17% drop in new diesel car registrations last year, the value of used diesels recorded an average price of £13,944 in 2017, an annual like-for-like price growth of 2% for the year as a whole.

The average price of a petrol car was lower at £9,471, but represented an increase of 7% on a like-for-like basis for the year.

Prices stabilised in December, following a drop of £143 between October and November. 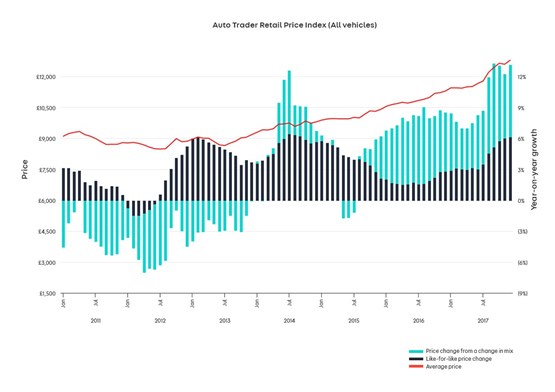 “The Government’s demonisation of diesel really isn’t helping to build consumer confidence, and nor is it justified as many modern Euro 6 engines are less harmful than their petrol equivalents. Diesels remain an excellent option for many motorists, particularly those that drive long distances and are looking for the efficiency only a diesel can offer.”

Across Auto Trader’s marketplace, which attracts 55 million cross platform visits a month, 22% of all searches that took place on Auto Trader each month are based on fuel type.

Comparing the total volume of diesel searches across the year, the number of searches for diesels on Auto Trader fell -27% between 2016 and 2017.

“It’s clear that the Government’s widely publicised anti-diesel rhetoric has dramatically affected consumer purchasing intentions in 2017. It is however hugely positive to see such a significant spike in AFVs, which highlights an exciting opportunity for retailers in 2018. During the months ahead, the market would greatly benefit from the Government changing the focus of the fuel debate to be less anti diesel and more pro electric,” said Edwards-Smajda.

Diesel suffering a 'slow death' says automotive academic, with share to fall to 15% by 2025

Diesel suffering a 'slow death' says automotive academic, with share to fall to 15% by 2025