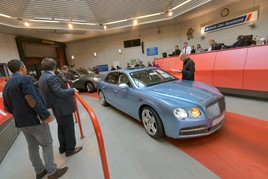 The average value of a used car at BCA auctions declined 0.8% during April despite demand for dealer part-exchanges sending their values to above £5,000 for the first time.

The monthly BCA Pulse report said that changing model mix and the rising volumes of the post ‘plate-change period had caused the headline average value to decline to £9,584, a fall of £84 (0.8%) as values rose by £494 (5.4%) year-on-year. 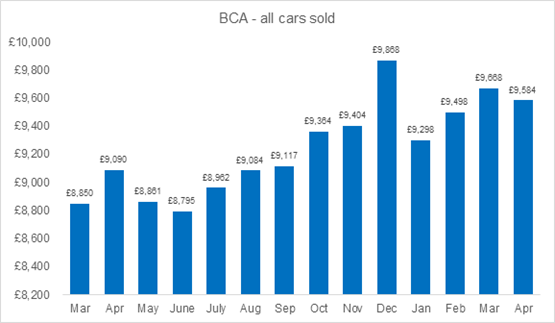 Record did tumble during a month which saw high demand, according to the report, however.

Fleet and lease values rose to £11,137, the highest point on record, while dealer part-exchange prices increased sharply to reach £5,000 for the first time.

Values also increased for nearly-new vehicles, although model mix has a significant influence in this low volume sector.

Pearson added: “Whilst demand traditionally softens into the summer months, we are continuing to see inventory, attendance and bidding activity at increased levels and therefore we anticipate that average values will remain stable, driven by the high quality of stock that we offer.”

The BCA Pulse report revealed that fleet and lease stock passing through the auction halls posted a new record value of £11,137 in April as buyer demand continued. 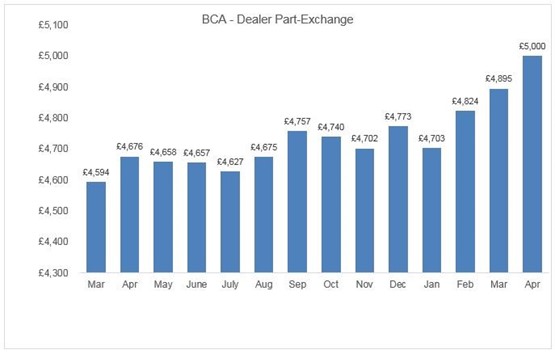 Average values improved marginally over the month, albeit by just £15, with retained value against original MRP (Manufacturers Retail Price) falling slightly to 44.08%.

Year-on-year values were ahead by £324, representing a substantial 6.9% uplift with age static and mileage rising.