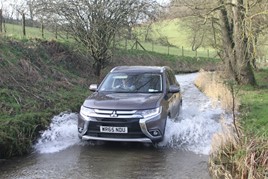 The 2015 Mitsubishi Outlander diesel automatic was the fastest selling car in June, according to data from Auto Trader.

The Outlander took 19 days to sell on average.

The Japanese SUV’s pole position in June marked what was a popular month for larger vehicles.

Following closely behind the Mitsubishi at the top of the national top 10 list, was Mazda’s CX-5 (2016 diesel manual) which also took an average of 19 days to sell, Audi’s A4 Avant estate (2016 diesel automatic) at 20 days, and in fourth position, the manual version of the Outlander (2015 diesel manual), at 21 days.

Looking across the UK, it was a similar story of bigger is better.

Despite the latest new car market data, which revealed new diesel registrations fell 28.2% in June, in terms of popularity, used diesels fared much better, making six of the national top 10, and seven of the 13 countries and regions tracked across the UK.

Karolina Edwards-Smajda, Auto Trader retailer and consumer products director, said: “Despite what has been at times a turbulent first six months of the year, as we enter into the second half of 2018 it’s reassuring to see that consumer demand for quality used cars remains strong.

“However, while the forecast for the full year suggests a healthy H2, the market will face a number of challenges, not least the ongoing uncertainty around diesel and Brexit.