Used car sales volumes declined by 2.6% year-on-year during the first half of 2018, despite remaining largely flat during the second quarter, the SMMT has reported.

A 4.8% decline in used car sales in the period to the end of March meant that the market remained in deficit at the end of June following a further nominal decline of 0.4% in Q2.

The chief executive of the Society of Motor Manufacturers and Traders, Mike Hawes, insisted that it was “great to see the used car sector remain in robust health”, however, as 2,093,429 vehicles changed hands in Q2.

SUVs and executive models experienced the biggest growth, with demand up 10.7% and 3.9% during the period, but superminis remained the most popular segment, despite a -2.6% decline in transactions.

The supermini segment accounted for 32.6% of the market.

Despite a downward trend in the new vehicle market, used diesel cars’ popularity grew 3.2%, with some 868,573 used buyers driving one home in the period.

Petrol transactions fell 3.3%, meanwhile, as demand for hybrid, plug-in hybrid and fully electric vehicles grew by more than a quarter, with some 26,832 changing hands – 5,417 more than a year ago. 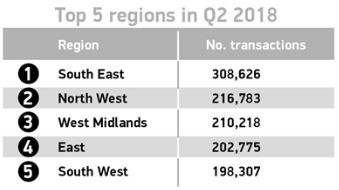 Hawes said: “It’s great to see the used car sector remain in robust health as motorists take advantage of the exciting high-tech models filtering down from the new sector – including some of the latest low emission diesel and alternatively fuelled vehicles.

“However, with used sales so closely reflecting the new car market, some cooling is expected over the coming months.

“Given fleet renewal is the fastest way to improve air quality and reduce CO2, we need greater business and consumer confidence to keep both markets moving.”

The SMMT’s tracking of colour trends in the used car segment showed that black to be the UK’s favourite hue for a second consecutive quarter and silver and blue taking second and third places.

Commenting on the decline in used car transactions in the first half of 2018, Ian Plummer, Auto Trader’s manufacturer and agency director, said that the flat market in Q2 demonstrated “the resilience of the used car market and the opportunities available to retailers facing a more challenging new car sector”.

He added: “It’s particularly reassuring to see diesel perform so well. Despite the ongoing negative rhetoric surrounding the fuel debate and the government’s Road to Zero ambitions, consumers are clearly voting with their wallets.

“Their greater fuel efficiency makes them a more attractive alternative to budget conscious consumers, particularly when it comes to larger, family sized cars.

“However, on our marketplace there is a clear indication the popularity of diesel is waning. Last month diesel continued its long-term decline to hit 48% of all searches by fuel type. Petrol, meanwhile, crept up to account for 47%.

“Nevertheless, the volume of used diesels sold in Q2 is reassuringly robust, as is their price. As highlighted by our Retail Price Index, the average price of second-hand diesels continues to grow, increasing 6% year-on-year in July, a little behind petrol, which recorded a 9% increase.”