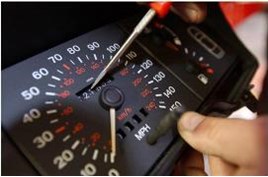 Motorists' increasing use of underhand tactics to ensure the residual value of their vehicles has led to a record number of clocked cars on UK roads, according to data published by the Local Government Association (LGA).

According to the Association, which represents local authorities across the UK, more than two million cars now feature fraudulently altered odometer readings following an explosion in the number of motorists taking advantage of mileage correction services.

A proposed EU ban clocking – which is not currently illegal in the UK – was due to be in place by May 2018, but was never introduced, leaving clocking experts free to advertise their services.

Devices allowing DIY mileage fraud can also be bought online for as little as £100.

The Telegraph newspaper reported that one recent council prosecution found that a van sold with 89,000 miles on the clock was actually found to have travelled more than 243,000 miles.

In another case the mileage differences on 10 clocked vehicles added together were the equivalent of travelling to the moon, it said.

The latest figures from the LGA show that instances of clocking have increased by 25% between 2014 and 2016, with the knock-on cost to motorists estimated at £800 million per year in the UK.

One in 16 vehicles checked now has a mileage discrepancy, The Telegraph reported, meaning that there could be 2.3 million clocked and “potentially dangerous cars” on UK roads.

While the Telegraph’s report noted that motorists are keen to employ the services of a clocking specialist – many of whom advertise their services openly – to increase the value of the vehicle before resale, mileage penalties on PCP finance offers are also playing a part.

Barry Shorto, head of industry relations at Cap HPI, told AM that the continued development of technologies to alter digital odometers is a major factor with easy access to this technology via the internet and similarly, the ease of access to mileage adjustment services online, “some of whom will behave legitimately, others less so”.

He said: “The increase in mileage-related finance arrangements such as PCP and PCH may also be a contributing factor as motorists look to bring down their mileage count to within contracted levels and avoid paying penalties for excess mileage.”

Shorto added: “Our advice to dealers is not only should they make conducting mileage investigations an integral part of their business process to protect their reputation and their customers, but they must actively promote the fact that these checks have been done for customer peace of mind.

“Proof of a mileage check needs to be a key part of a dealer’s sales strategy, promoting the quality of their stock, as well as highlighting the dangers of clocking for their customers.”