December can be a fickle month with retail consumers looking to spend their hard-earned cash on festive gifts and celebrations resulting in lower footfall, tougher negotiation and reduced profit. Historically the industry saw a decline in used car pricing during the course of the month followed by an uplift in January when the public returned to the market looking to lose the new year blues by treating themselves to a replacement car. However, the industry has been changing and this year has been remarkably stable given the circumstances.

New car registrations finished the year with a 3.4% increase over the figure posted in December 2018 taking the full-year figure to just 2.4% behind the 2018 market which is marginally better than the 2.7% decrease that Cazana forecast in late 2017. The private market was 3.2% lower than the previous year, although the fleet market posted a 0.8% increase mitigating the overall loss. The drop-in registrations were not unexpected given the social and economic landscape and the fact there was a general election in the middle of the month. With the Conservative Party winning a significant majority the Brexit mandate was made very clear by the general public and irrespective of individual preferences the country is now able to plan constructively for the months and years ahead knowing that the UK will leave the European Union in 2020.

This is likely because national sentiment had already predicted a Tory win which meant that leaving the European Union swiftly was a certainty. This gave consumers more comfort in spending money and it is interesting to note that the automotive industry has been able to outperform other big-ticket item retail sectors and although the new car market has declined the used car sector has been reasonably vibrant.

The SMMT monthly new car registrations by brand highlight that some of the OEM’s look as if they may have been reaching out during December to reach internal and CAFE targets. Significant volume increases over December 2018 were rife, and that is probably down to pre-registration rather than genuine sales and has subsequently meant more cars heading for the late plate used car market although there has been a marginal impact on retail pricing in comparison to December 2018 as shown in the chart below which shows the performance of retail pricing as a percentage of original cost new in the market at key age and mileage profiles against the same period over the last three years. 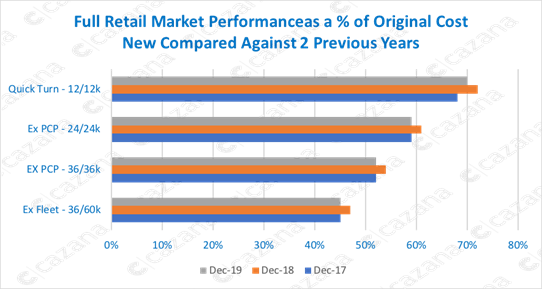 Without exception, the drop across all sectors has been two percentage points and it is interesting to note that the current market position largely replicates the pricing points in 2017. Only the late plate market is performing better than 2017 which may come as a surprise considering the volume of cars that have been fed into the sub twelve month and twelve-thousand-mile sector in recent months. This perhaps highlights that the retail consumers, specifically those that would have bought a new car, have migrated to the attractively financed late plate market.

On the basis that the new market has dropped by 2.4% and that there has also been a change in the propulsion type off the back of the negative anti-diesel campaign, the used car market is beginning to see a marked change in the demand pattern. The next few years will be interesting as used car buyers seek the changes in vehicle type that the new car market is experiencing. Unfortunately, with the significant tail off in new diesel car sales and the increase in new petrol cars, we are seeing a rise in CO2 levels which of course may result in new legislation against this fuel type in the future as the environment begins to feel the increased effect of this type of pollution as was the case before the rise of diesel in the early to mid-noughties.

The chart below focuses on the retail pricing performance of BEV’s and Hybrids as a percentage of original cost new at key age and mileage profiles over the last year: 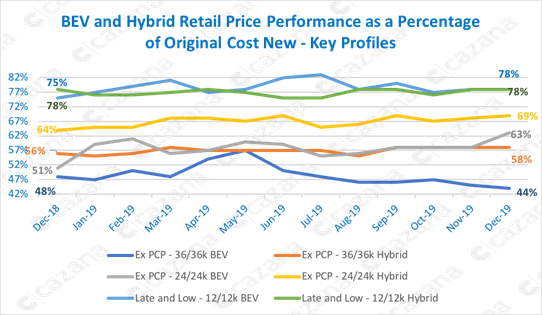 This chart gives a clear picture of the whole market performance for these two key fuel types and the results are interesting. The first point to acknowledge is that late plate low mileage BEV and Hybrid cars are still achieving a very high price in relation to the original cost new. This is unlikely to be sustainable going forward. That said whilst Hybrid values over the last twelve months have remained stable, BEV performance has improved by three percentage points.

Looking at the two-year-old data and the news is positive. Retail pricing for Hybrid models has improved by nine percentage points and this reflects the strength in retail consumer demand. BEV performance has been even stronger with pricing increasing by a startling twelve percentage points. Even if the December 2018 was a negative monthly blip in performance there has still been some very positive traction for this type of vehicle and this is probably due to improved supply as well as greater customer understanding of the technology

Three-year-old results are less spectacular with just a two-percentage point improvement for Hybrid and a drop of four percentage points for BEV’s. The rationale here is that the technology and performance of these cars has been superseded and they are as such less relevant and useable and therefore in lesser demand. This is perhaps an interesting example in the impact on pricing performance on outmoded technology and something that should be borne in mind as the industry accelerates the rate of technological advance.

Therefore, December can be marked as a reasonably good month for the new and used car markets overall. Despite the political and economic instability and fairly low consumer confidence, the industry successfully outperformed other UK retail sectors. Whilst some are still concerned about Brexit and the change of government the majority accept that the country now has a timetable for the future and commercial strategy setting can be ratified with a higher level of certainty than has been possible in the last few years.

Cazana’s truly live retail-driven data is unique in providing up to the moment market insight and intelligence being driven from over 25,000 websites each day in the UK alone. Seeking more focussed information relating to specific market sectors or time periods ensures maximum vision and the most comprehensive insight required to maximise profit, ROI and asset management. With market conditions continuing to change by the day, top quality up to the minute commercial data identifies market variations quicker than any other data provider and are vital to ensure modern automotive organisations are in a position to make the most effective strategic decisions.