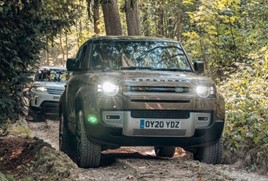 The average price of a used Land Rover has increased by 2% in the last month, with values up 4% year on year according to new data from Motorway.

The online used car stocking platform's Used Carometer reveals the average price of used cars valued on its platform each month, based on market valuations of premium used cars on Motorway over £10k, less than five years old, under 50,000 miles on the clock.

Motorway said the rise, coupled with a 10% increase in the number of car valuations for Land Rover in October demonstrates increased demand for these premium SUVs in the used car market.

Tom Leathes, the chief executive of Motorway, said: “With the ongoing pandemic, and restrictions set to continue through the winter, people are turning to the car market to avoid public transport and travel safely.

“However, with the uncertain economic outlook, many consumers are reluctant to buy new. Instead, they are choosing to buy used cars and we have seen a significant increase in demand across more-expensive brands like Jaguar, Land Rover, Mercedes and BMW, which is keeping used car prices strong across the premium vehicle sector."

Motorway’s data also revealed that the average price of a used diesel car has been steadily rising month-on-month, in contrast to valuation reports from Cap HPI and Indicata.

The average price for diesel used cars were 3% higher in September than August and October prices were 1% higher than September.

Leathes said: “Our data also clearly shows consumers are not turning their back on fossil fuels just yet. While new car sales continue to drop, consumers are quickly realising they can get a great deal on a top of the range Land Rover that’s only a few years old, instead of dropping £60k on a new one, or on a new electric car.”

“As a result, Jaguar Land Rover is now enjoying a renaissance in used vehicle demand that it may not have seen if not for the pandemic. We think the government’s changing legislation on fuel is unlikely to impact consumer appetite for premium used cars at a good price over the next twelve months.”

Motorway found the most popular cars among dealers in October include Mercedes, BMW and Audi, with average prices holding at around £20k and all three brands performing well against October 2019.

This was followed by Jeep and then Honda which each had respective uplifts of 6% and 5%, compared to September.

Porsche bounced back from last month’s drop and has now returned to its previous summer prices, jumping 4%, an increase of £1,444.

A sample of valuations movement data from Motorway's October Carometer: 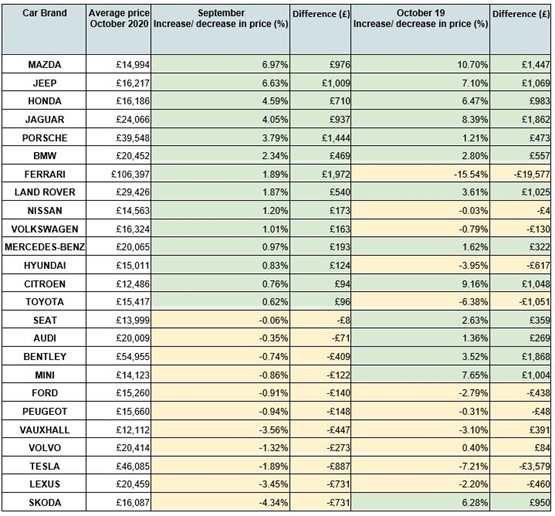 'No cause for alarm' as used car prices continue decline, says Cap HPI

'No cause for alarm' as used car prices continue decline, says Cap HPI