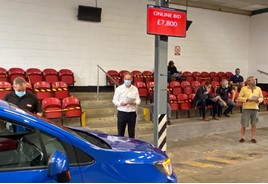 Being able to physically inspect the lower priced grade four used cars enables them to identify those they can repair themselves and profit from, instead of just being forced to pay the current high prices for grade one-three cars.

“We have been open for business for over seven weeks with buyers able to inspect and bid on used cars physically in the auction. This has been invaluable for dealers looking for an alternative to paying the current high market prices for cars,” said Alex Wright, managing director of SVA.

“Buyers also benefit from being able to engage with SVA staff, the auctioneer and vendors, who are back on the rostrum, about the cars on sale that need refurbishment. This level of due diligence on grade four used cars is impossible to carry out online,” he added.

Dealers have welcomed the opportunity to engage with other buyers and vendors about the quick-moving market and SVA has responded by increasing trade buyers on site to 75 on sale days.

Since dealers re-opened their showrooms in April, SVA says it has experienced “impeccable” buyer behaviour and continues to work to a two-metre social distanced strategy and with compulsory mask wearing on site. The auction remains shut to private buyers until after 21 June.

In April, Aston Barclay reported that an unexpected number of dealers returned to auction halls, with some turned away in order to maintain social distancing. The company had previously said that digital auction would likely replace the majority of physical sales.