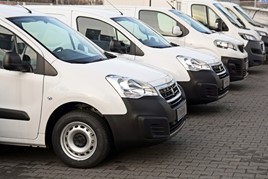 Used vans prices are expected to start rising and not stop until some time in 2022, according to Cox Automotive.

Despite a slight and temporary decrease in the average selling price of used vans at Manheim auctions in May 2021, the business is warning the industry to brace itself as the sector continues to be affected by material shortages in the new van market.

James Davis, customer insight director at Cox Automotive, warns that a combination of May’s record-breaking Euro 6 vans sold volume share, the demand for cleaner vans due to growing Clean Air Zones, as well as the supply shortages of new vans – are still not likely to reduce used van selling prices throughout 2021.

He believes that it won’t be until late 2022 that the widespread and deep raw material, component and supply chain issues affecting the manufacture of new vans are resolved. Until then, Davis forecasts that pent up demand will continue, as buyers scramble to pick the best out of what is becoming an increasingly older and higher mileage used van market.

In its latest LCV monthly market tracker, Manheim’s auction data shows a slight 2% decrease in average van values (£225), but with mileage and age increasing as stock becomes harder to source.

Manheim’s LCV market tracker shows a real challenge between supply and demand. Conversion rates are the highest recorded in 2021 with nine out of ten vans selling at the first time of asking. However, this doesn’t mean it’s all going the vendors’ way. Davis reveals that auctioneers are having to dig deep and start damaged and high mileage vans off at lower values to engage buyers and achieve optimum values. Despite this, days to sell is sitting at just nine days.

He said: “Global new van production is incredibly challenged due to raw material shortages for semiconductors, rubber and metal. This is accelerating demand in the used market, and with the exception of May which was an anomaly, driving prices higher overall. On the other hand, fleet and leasing companies are holding onto stock for longer, creating a significant contrast between supply and demand. This will only worsen as we move through the year.”

On June 1, Birmingham opened its first ever Clean Air Zone, following in the steps of London and Bath by charging non-compliant emission vehicles from entering the city. This is likely to add further to market challenges, triggering even greater demand for compliant used models.

Davis explained: “Newer, cleaner, Euro-6 used vans continue to be a priority, with the sold volume share during May, representing 58.5% of total volume sold by Manheim. Thirty-four per cent of Euro-6 volume sold to a franchised dealer, an increase of 8% month-on-month. This reflects the increased focus on used retail in the absence of new van volumes.

“The go-live of Birmingham’s Clean Air Zone on 1st June, has no doubt generated a re-location of fleet profile to avoid daily charges. That said, many other cities are now refocusing on clean air plans as we exit the pandemic, causing further headaches with the extension of lead times, especially the enlargement of the London ULEZ to include Greater London later this year. Pragmatically, many businesses are likely passing these daily charges onto their customers either as a separate charge item or as part of their overall margin.”

Used van prices reached record levels at the start of 2021, according to BCA.